From the shores of Gitche Gumee

I am going to write this blog in the American version of English.

That is my native tongue, after all.

I hope only that, on this Polish-only portal of my beloved Polish Province, someone will find my messages in bottles, pluck them from the electronic waves, and read them.

(I do speak Polish, by the way — in my own charming manner — and I welcome feedback in that language.)

So, what are these shores of Gitche Gumee?

There is an epic poem by Henry Wadsworth Longfellow written in 1855, the year Mickiewicz died in Constantinople. It’s somewhat in Mickiewicz’s style: pathetic, in the archaic sense. Full of pseudo-ethnographic color. „Very nineteeth-century,” as someone wishing to appear sophisticated might say.

All of the ancestors of the man who wrote this poem came from England. But, as it was written on the Red Man’s Land, its hero is Native American. 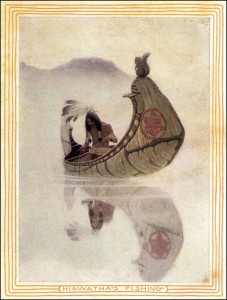 It’s called „The Song of Hiawatha” and the 22nd and final part begins:

On the shores of Gitche Gumee,
Of the shining Big-Sea-Water,
Stood Nokomis, the old woman,
Pointing with her finger westward,
O’er the water pointing westward,
To the purple clouds of sunset.

Many generations of American schoolkids learned these verses — and all the mawkish, galloping lines that follow — by heart.

But the ancestors of those children came not from Indian tribes (which genetic and linguistic data tell us came from ancient northeast Asia) but from England or Scotland or — later — Ireland, Scandinavia or Slavdom. Some of the kids were Greek or Jewish or Sicilian. None, I suppose, were Algonquin.

I imagine these juvenile dislocated Europeans chanting about the Gitche Gumee and I can almost feel the identity crisis gathering in their pale little breasts.

I came to Poland not from the shores of Gitche Gumee but from the equally exotic-sounding city of Milwaukee in the state of Wisconsin on the shores of Lake Michigan. (All of those place-names are Indian: Algonquins invented the first two, Ojibwes the last.)

Perhaps my memoirs will bear the title From the Shores of Michi-gumee.

But I am no Algonquin, either. My ancestors came from the British Isles (on Dad’s side) and Mitteleuropa (on Mom’s). Our language, religion, clothing, food and genes were all European in origin. We went to Mass on Sunday and sang translated German hymns. That was true of nearly all our neighbors, too. So why — I asked myself when was still in school — should I contemplate a lost fairy-world of transplanted Siberians?

Why sing of Hiawatha, a semi-fictional Mohawk chief, and his entirely fictional lover, the ill-fated and odd-named Minnehaha, however fetching her plaits?

Instead of Hiawatha I prefer to sing of Hyacinth. And now, nightly, I do so.

My story of emigration to Poland touches my deepest identity. While in one sense radically dislocated from the culture of my youth in the capital of capitalism, the grand old U.S.A., I feel somehow closer to myself  — to my Catholic and European self — on the shores of Wisła-gumee, as it were.

About which more later.