Where are you going to church this Sunday? „I’ll be at Saint Stan’s.”

„Saint Stan’s” in Milwaukee is shorthand for the Church of Saint Stanislaus: the first Polish Roman Catholic parish in the entire region, and perhaps also in the whole United States, founded in 1866. (A reader points out that the first Polish parish in the US was established at Panna Maria, and a few weeks later at Bandera, both in Texas, in 1855. The latter still exists.)

Half of the original community was Kashubian. I think Poles would be proud of it. 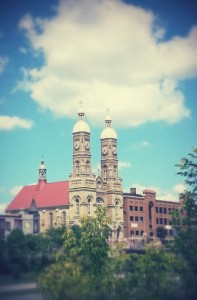 Of course Saint Stanislaus didn’t always look like this. It started out as a congregation gathered in a little formerly-Lutheran church, which was not much more than a log cabin with a cross on the roof.

But by 1872 this splendid edifice was in place, marked in huge letters above the door: „Kościół Św. Stanisława, B. i M.”. 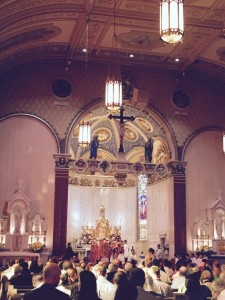 The parish was in decline in the late 1990s and most likely would have closed its doors for good had not the Institute of Christ the King Sovereign Priest taken over care of the church in 2007. Today, the noble building with its twin steeples is home to the (Tridentine) Latin Mass and a growing number of young Catholics. The parish is thriving as it did in its early days.

There’s been an architectural rebirth, too: the church has been restored inside and out and is looking splendid on its 150th anniversary, as this new video shows. (Drones in service of the Church. Who would have thought?)

I was asked to preach by Canon Benoît Jayr, the pastor of the community. The first thing I had to do was check which Sunday last Sunday was on the liturgical calendar. While most Catholics were celebrating the Thirtieth Sunday in Ordinary Time, those who use the so-called „extraordinary form” were observing the Twenty-Third Sunday after Pentecost, according to the pre-Conciliar system. 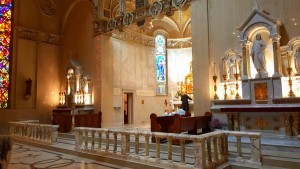 It was a joy to climb the high stone ambo at two masses in a row and address the packed church while wearing the cappa of the Order. (I am a preacher, after all.)

It is a vast place and perfect for delivering a dramatic homily, especially against the background of the Latin mass and the phalanx of altar servers and clouds of incense. It is also a pleasure to preach in English once in a while.

Here is the Gospel in the English translation they used, full of „thees” and „thous” (Matthew 9:18-26 in the Douay-Rheims translation of the late 16th century):

As he was speaking these things unto them, behold a certain ruler came up, and adored him, saying: Lord, my daughter is even now dead; but come, lay thy hand upon her, and she shall live. And Jesus rising up followed him, with his disciples. And behold a woman who was troubled with an issue of blood twelve years, came behind him, and touched the hem of his garment. 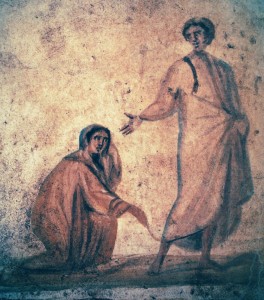 Jesus Healing the Woman with a Hemorrhage, from the Catacombs of Rome. Wikipedia.

For she said within herself: If I shall touch only his garment, I shall be healed. But Jesus turning and seeing her, said: Be of good heart, daughter, thy faith hath made thee whole. And the woman was made whole from that hour. And when Jesus was come into the house of the ruler, and saw the minstrels and the multitude making a rout, He said: Give place, for the girl is not dead, but sleepeth. And they laughed him to scorn. And when the multitude was put forth, he went in, and took her by the hand. And the maid arose.

And the fame hereof went abroad into all that country.

And here is what I said:

Jesus says to us today, “Be of good heart… your faith has made you whole.”

What we see in the Gospel today isn’t just one healing, but two.

It is a healing within a healing. One healing is interrupted, by another. An interrupted healing. What is that?

Remember that at the start of the Gospel Jesus agrees to come to the home of the synagogue official, or ruler. In Mark’s Gospel (5) we get this man’s name, Jairus or Yair. He convinced Jesus to come to his house. But then, in the crowd, a woman comes up to Jesus from behind. She sneaks up on him. And she is wholly and entirely healed. But that’s not the end of the story. Because then Jesus comes into the house of this man Jairus, and he finds his daughter, who is not just sick, she’s dead! And he heals her, too.

That is the power of our Lord Jesus Christ.

His healing was at first interrupted, but the girl rises from her deathbed and is healed, all the same.

But let’s focus for a minute on the man who begins this Gospel. On that girl’s dad. Let’s focus on the father. After all, the Gospel begins with him: “as Jesus was speaking… a certain ruler came up… [and said:] my daughter has just died; but come….”

What did this father experience today?

You can imagine the father’s anguish.

Here was his daughter. Far too young to have her life snuffed out.  And Jairus, this ruler of the Jews, he would do anything to help his daughter. Anything.

So Jairus falls to his knees and begs Jesus to help.

He falls to his knees: There are times in our lives when it seems as though the first thing we need to do is to get God’s attention.

What does the Psalm (7) say?: Arise, O LORD, in Your anger; Lift up Yourself against the rage of my adversaries, And arouse Yourself for me; You have appointed judgment.

We’re trying to wake God up: We’ve got needs here. You’re not paying enough attention to us. Come on!

But we are often disappointed in our impatience.

And in this Gospel you can see that things go right off the rails for the father. While they are on the way to heal his daughter, Jesus gets interrupted.

Now, it’s a worthy interruption: a woman who had experienced a hemorrhage for 12 years hopes that she will be healed. We have a lot of compassion for her.

But this father: it seems as though he must have been perturbed with that woman. Can you imagine? They’re on their way to heal his daughter, and Jesus just stops for someone else.

Only our plans never seem to work out, do they?

We are not the first to have this experience. Moses had a plan, but there was a burning bush.

And David had a plan. Did his plan include defeating Goliath and becoming king?

Job had a plan. And then his roof fell in.

And Ruth. Did her plan include her husband dying in a foreign land?

I wonder what Mary’s plan was. The mother of our Lord. Did she plan on carrying the Son of God in her womb, while remaining a virgin?

I think it’s fair to say that that wasn’t her plan.

Saint Peter had a plan, but when Jesus foretold his own death, Peter went so far as to rebuke the Son of God (Mt 16:22).

Now that is confidence in your plan over God’s. But Peter’s plan ended up going horribly awry.

And: we are all the better for it.

Look at all of these great plans of Moses, David, Job, Ruth, Mary, Peter. In every one of these cases the plans that they had made are like dust in comparison and with what God had in store.

God’s holy design was far, far better than we could have ever conceived.

“I know the plans I have for you, declares the Lord, plans to prosper you, not to harm you. I have plans to give you a future filled with hope.” Those are the words of the Prophet. (Jeremiah 29)

To give you a future filled with hope:

God has a plan for you. His plan is forgiveness. His plan is resurrection. Communion with him. His plan is eternal life itself. These are greater things even than a miraculous healing of the body. Even than raising a child from the dead.

Remember: Jairus’s daughter was healed, on God’s own time and in God’s own way. More than healed, Jesus raised that little girl from the dead.

But you’ll notice that the world — the crowds — they laughed. They couldn’t believe that Jesus could do something so strange; so marvelous.

Once again, God’s plans were so magnificent at the world couldn’t get it; they wouldn’t get it. They refused.

Sometimes the world laughs at God. Scoffs at your faith in God. Dares God to reveal himself when and where they want. They surely cannot accept the scandal of the Cross.

We’re in a Polish church. And I believe Czesław Miłosz, the Polish poet, wrote of this when he said:

To whom should I turn
With that affair so dark
Of pain and also guilt
In the structure of the world,
If either here below
Or over there on high
No power can abolish
The cause and the effect?

Don’t think, don’t remember
The death on the cross,
Though everyday He dies,
The only one, all-loving,
Who without any need
Consented and allowed
To exist all that is,
Including nails of torture.

Totally enigmatic.
Impossibly intricate.
Better to stop speech here.
This language is not for people.

We humans prefer to censor God — to tell him what he can’t do.

But no matter: that is not our path. We here in this church are reaching out to be healed.

A resurrection is coming. Your body will change, your life will be renewed. And at life’s end you will enter into the eternal rest with angels and archangels angels of all the company of heaven.

„O taste and see how gracious the Lord is. Blessed is the man who trusts in him.” Or as Saint Paul said to us today: „stand fast in the Lord, my dearly beloved.”

And now, at the end of these reflections: do you know – do you know – who in today’s Gospel really heard this message? Who stood fast in the Lord? Who trusted in him and knew that God’s ways are not our ways? Not the leader of the synagogue. It was that woman, the woman with hemorrhage. She knew that God gives us beauty and joy and peace. But his peace is not like the peace of this world. And his beauty is not like the beauty we see in magazines. She came to Jesus exhausted by an embarrassing disease. She came there pale from anemia and ashy and weak. She came just to touch the hem of his garment. Because she knew: Jesus is the one who works beautiful miracles with a blob of spit and a bit of mud. He touches us with a bare hand. With the fringes of his garment. He makes us whole. And so we do what that woman did.

We come limping to the Lord. We know we aren’t pretty. We are not ashamed. We present ourselves to him as the bloody messes that we are. We crawl, like this sick woman, to Jesus. And God works wonders in us:

(Credit goes to Pastor Todd Peperkorn of Holy Cross Lutheran Church in Rocklin, California, whose words and interpretation I used for a large part of this homily.)