Today is the Feast (technically, a memorial) of the Queenship of Mary.

The Queenship of Mary was established on the calendar of the Catholic Church by Pope Pius XII only in 1954. Pope Pius was famous for his Marian writings, and to launch this new feast he hatched a whole encyclical, Ad caeli reginam. It’s a gem. 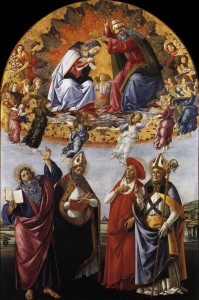 Sandro Botticelli, 1488–1490. The Coronation of the Virgin. Altarpiece at San Marco in Florence.

The new feast has ancient roots. Pius had no time for those who would accuse him of inventing new titles for the Virgin Mary or manufacturing novel devotions in calling her Queen: „From the earliest ages of the Catholic church, the Christian people, whether in time of triumph or more especially in time of crisis, has addressed prayers of petition and hymns of praise and veneration to the Queen of Heaven,” he wrote.

„And never has that hope wavered which they placed in the Mother of the Divine King, Jesus Christ; nor has that faith ever failed by which we are taught that Mary, the Virgin Mother of God, reigns with a mother’s solicitude over the entire world, just as she is crowned in heavenly blessedness with the glory of a Queen.”

It’s nice to have a queen you love like a mother. And Christians have always known that that’s just the kind of Queen they have.

The Gospel for today — or at least the one we read at Mass — is Luke 1:26-38, the account of the Annunciation.

In the sixth month, the angel Gabriel was sent by God to a town in Galilee called Nazareth, to a virgin engaged to a man whose name was Joseph, of the house of David. The virgin’s name was Mary.

And he came to her and said, „Greetings, favored one! The Lord is with you.” But she was much perplexed by his words and pondered what sort of greeting this might be. The angel said to her, „Do not be afraid, Mary, for you have found favor with God. And now, you will conceive in your womb and bear a son, and you will name him Jesus.

… Mary said to the angel, „How can this be, since I know not a man?”  The angel said to her, „The Holy Spirit will come upon you, and the power of the Most High will overshadow you; therefore  the child to be born will be holy; he will be called Son of God.

… Then Mary said, „Here am I, the servant of the Lord; let it be with me according to your word.” Then the angel departed from her. 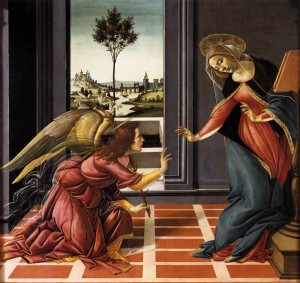 How is this story linked to Mary’s queenship?

Literally, „be it to me according to the word of you.”

Fiat: That’s what Mary told the Angel Gabriel when he flew in the window one fine day and announced she’d conceive a child without ever knowing man.

Let it be done.

What prepared Mary for the pivotal moment, when Christ became in her the new Adam and she, with Christ in her, became the new Eve? (see Ad caeli Reginam, 38)

Why did she say 'yes’ at the right time? Why did this girl Mary, only in her teens, react as she did when the unspoken question (Would you? Will you?) came?

No one ever seems to ask that.

The answer seems to be, partly, because she was prepared.

An old tradition, less fashionable now, tells us that Mary’s parents, Joachim and Anne, had been unhappily childless until Mary was born. Grateful for the gift of their daughter, they brought her to the Temple in Jerusalem to consecrate her to God. 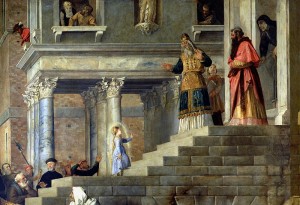 That account comes from the apocryphal „Infancy Narrative of James”. Later versions of the story (the Gospel of Pseudo-Matthew and the Gospel of the Nativity of Mary, for example) tell us that Mary was taken to the Temple at around the age of three in fulfillment of a vow.

Tradition holds that she stayed at the Temple to be educated.

Hans Holbein the Elder, 1493. The Presentation of the Virgin. Originally created for the Abbey at Weingarten near Ravensburg.

Mary’s presentation was celebrated in Jerusalem in the sixth century, and a church was built there in honor of this event. The Eastern Church was more zealous about commemorating the feast, but it appears in the West by the 11th century.

In the 16th century it became a feast of the universal Church.

It’s hard for modern people to appreciate a feast like this. After all, it has no basis in canonical Scripture. The presentation may not have happened at all.

But it shows us a major truth about Mary: from the beginning, she was dedicated to God. She studied in the Temple, and she became a temple: she herself became a temple greater than any edifice of stone.

In other words, Mary was prepared. She was ready for Gabriel when he flew in that day.

Look again at some of the famous images of the Annunciation.

And there is her book.

Here is Mary and her book in a work by Simone Martini of Siena (1333): 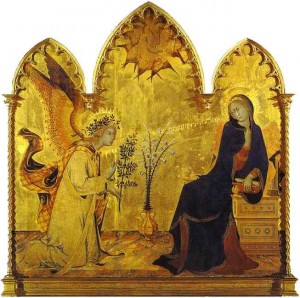 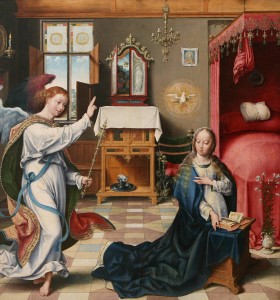 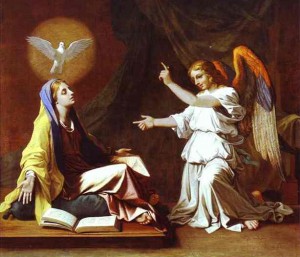 It’s in this work by Matthias Stom, where Mary is so eager to read that she’s pulled out an anachronistic candle: 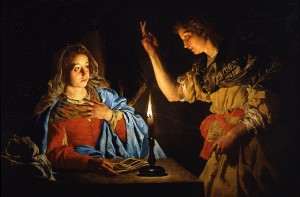 And the book even shows up in this wobbly contemporary confection by someone called by Svitozar Nenyuk, who lives in America: 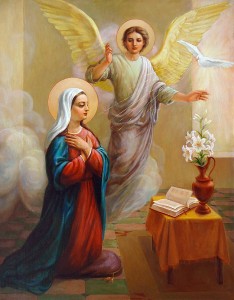 A book appears in almost every image, no matter the age.  Why?

Because Mary was a smart girl. She knew how to read. She had been to the Temple, and she was educated.

Now, there are those who will say that the book represents the Word, who became Flesh in Mary and dwelt among us. And that is also true.

Or that the book is a book of the prophets, and particularly the Prophet Isaiah, where Mary is reading a passage we understand to be foretelling the coming of Christ: „And he will be called Wonderful Counselor, Mighty God, Everlasting Father, Prince of Peace.”

That may be so.

I always imagine her with the Book of the Psalms (תהילים, tehillim), combining study and prayer. To this day, pious Jewish women are often seen with a small prayer-book  in hand. That’s how I see Mary as the angel came in.

God is Love, and God loves us. We may respond by loving God, but we do so — always — in freedom. God doesn’t want the love of slaves. He made us free, that we might freely choose him.

And to make the right choice — when the hour of choosing comes — in freedom, it helps to be prepared. It helps to have used your God-given intellect to learn, to focus in prayer: to draw closer to Him. Then you’ll recognize God’s plan when you hear it.

You notice that, before she said „Be it done…”, Mary did say one other thing. She asked a question. An intelligent question: „How shall this be, seeing I know not a man?”

That’s the sign of a bright woman. A free woman. And once she was satisfied that she knew what was up, she made her choice. Deo gratias.

We are reigned over by a Queen who was created in utter freedom by the God who needs nothing and no one, but who makes us anyway, out of pure and gracious love.

We are the subjects of a Queen who cultivated and disciplined her freedom, and so became wiser and more free.

Our Queen is the one who, in total freedom, chose to allow the great cosmic plan to come to fruition in her.

And in calling Mary Queen, we choose the path of freedom, too.

Are you a Pope withering in a war, menaced by two atheist powers? Claim Mary as your Queen, and may earthly rulers rot.

Are you a Pole squeezed on three sides by „enlightened” potentates? Tack up a lithograph of Our Lady of Częstochowa (with a big crown on her head).

Are you sick, here in the 21st century, of the false freedom of the loose, the lewd and the lax that is everywhere on offer and begs only to be clicked upon to proffer satisfaction?

Celebrate the Feast of the Queenship of Mary. Become her subject — and her student. And learn again how unfeigned freedom feels. 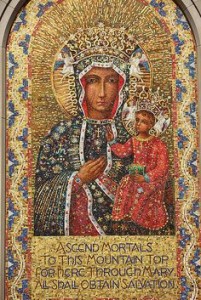