Last Sunday, I preached at my parents’ parish in Milwaukee, a particularly glamorous city in the middle of the United Sates. The Gospel was Luke 18:1-8, the story of the widow and the unjust judge.

Here is what I said:

We just heard, “Jesus told his disciples a parable about the necessity for them to pray always without becoming weary.” 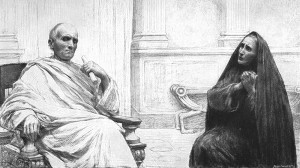 It’s rare for a parable in the Gospel to start with a sentence that actually tells us what the parable is about. It’s like the label on a can.

It says, “Jesus told his disciples a parable about the necessity for them to pray always without becoming weary.”

This parable, the parable of the unjust judge, appears only and exclusively in one Gospel, the Gospel of Luke.

And it is the only parable in any Gospel that ends with a question. “When the Son of Man comes, will he find faith on earth?”

In other words, can we sustain our faith in God while we carry our crosses to the darkness of Calvary?

Will we persist in loving him, following him, though we know not the day or hour of his coming?

Can we hold out?

Our guide to all of this is a widow. It’s hard to be a widow, as some of you know from personal experience. And it was even harder to be a widow in the time of Jesus.

The first century didn’t have 'Social Security’ or 'women in the workplace’.

There was no one to support you in a wild world.

You had to turn your attention toward survival.

In the Bible, widows and orphans are often listed together as prime examples of helplessness.

And this woman in Jesus’s parable, this widow, just can’t catch a break. Not only does she have nothing to her name and no one on her side, but also: someone more powerful than her is out to get her. Jesus doesn’t tell us exactly what this adversary was doing to her, but we know it was unjust. We know it was bad enough that she marched off to her last hope: the judge.

But the judge is a crook, too. He’s unjust.

And what does this widow do? The deck is stacked against her. She has an evil adversary and the judge is even worse, really. So her only recourse is to keep on badgering him.

Until he finally gives in. 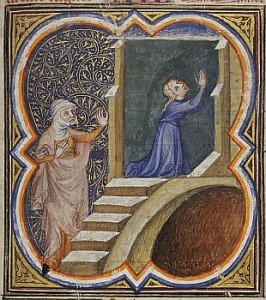 What a strange Gospel.

After all, we know that God is the Judge. The judge.

So wouldn’t it make more sense if the judge took this widow’s adversary and locked him in dark cell where there is nothing but wailing and gnashing of teeth? If he were a just judge?

That would make more sense than to compare God with a crook.

Isn’t our God the God of all grace, who invites people to pray and promises to listen? Isn’t He going to give justice to his chosen ones, who cry out to him day and night?

And it’s actually worse than that. Because Jesus casts his Father, God the Father, in the role of a judge.

And he’s not just an unjust judge, he is an uncaring judge.

He’s cold and indifferent. Why?

Maybe because Jesus knows that that is how we imagine his Father. Sometimes, or even most of the time, we Christians worry that God is deaf to our prayers. That he just doesn’t care.

Imagine a Christian orphan. Not only did she lose her parents at a young age, but she has absolutely no control over her life. She floats around through the „social services” system. Many families she lives with are well-meaning, but not all of them. And every morning, and every night, and all through the day, she prays to God:

„Help me: I desperately need your deliverance.” And it’s just more of the same. There’s a roof over her head, but it is not home. And when will it end?

When Jesus talks about this judge that refuses to give justice to the needy, that orphan – that person on the verge of despair – understands why our Lord frames the question in just that way.

She knows the despair of the widow.

And you’ll notice that Jesus doesn’t give us any details about the widow’s adversary in this parable. I wonder if that’s because he wants us to just insert our own details there.

Adversaries come in all sorts of shapes and sizes: the Christian in Syria who has watched bombs destroy his city and civil wars take his sons and he’s been crying out to God day and night for five years.

Or the Christian in our country who is facing a civil war in her own home, and her husband can’t say a kind word her, or his wife treats him like he’s a stranger, and the kids stand and watch it all.

Those people (perhaps) used to cry out to God day and night, but now they figure, „What’s the use?”

There’s the Christian who struggles with mental illness, or with abuse, or some kind of addiction; this one struggles with a sense of worthlessness, this one with brokenness, and they know what it’s like to be that widow in this parable: there’s no one on their side.

So this is a disturbing, jarring parable.

But with this parable, with this hard little story, Jesus comes to us right where we live. He stoops down, and he bends down: right down to our level.

And he says to us, I know how you feel. You may be doing all you can. But the judge could and the judge did give justice to this woman.

And that judge couldn’t have cared less about her. (“I neither fear God nor respect anyone, but because this widow keeps bothering me I shall deliver a just decision for her.”)

And what of God?

If the unjust judge does that, what about the great just Judge who is God?

Isn’t the God of all mercy going to hear the prayers of his chosen ones who cry out to him day and night?

Is he going to keep on putting you off forever?

This Gospel says: if the worst judge in the world isn’t going to do that, then God isn’t either.

What is your particular adversary? What is your opponent, like the wicked person who persecuted the widow in this story?

It helps to name it!

Even someone who calls himself a Christian can vacillate back and forth between blaming God for the adversary and blaming himself for it.

But Jesus says: God’s chosen ones call out to him day and night.

And now remember: your prayers are in there too!

Lord, have mercy on me. Help me. Not because I deserve your attention, but because I need it so desperately.

Jesus says, he will see to it that justice is done speedily. (Speedily!)

And to God all those millions of prayers are not just a bunch of noise, generated by millions of voices. He hears every one individually. He hears your voice, whether it be scratchy or squeaky or weak. He knows you and he hears you.

And will the God of all grace — will he keep on putting you off forever?

I tell you, Jesus says, God will see that they get justice. And quickly.

That’s God. The God of Justice. The Just Judge. He hears the cries of his chosen ones; and He answers them by making things right. By giving everyone what they deserve.

This has real implications for your future. Right now you may feel connected to God and feel his love. But then along with that comes all the power of the world, and it oppresses you, and you start to think that God forgot. That he forgot to take care of you.

But not for long! It is not going to stay this way for long, Jesus says. I say to you, God will see that they get justice, and quickly.

He is talking about the end. When Jesus comes and delivers his final act of justice. He will sweep away everyone and everything that opposes him and oppresses his people. And he will make things right!

And with that, with this story of justice, Jesus strikes right at the heart of what it means to be a Christian and what being a Christian means for you.

And I think you already know where I am going with this: you know that God is more than just a common judge or a policeman that makes things right by giving you what you deserve.

Our God is a God of justice and of mercy.

On his Cross, Jesus wiped all sin from your record; when he comes again, he is going to wipe sin from this entire earth.

And he will make things right.

And you will see his justice and his mercy.

You will see what Jesus has done for you: the orphan who doesn’t know how to be loved; the victim of war, the object of abuse, the prisoner to disease, to anxiety, or mental illness, or to addiction, to guilt, to brokenness, and hopelessness, or whatever our particular adversary is – these very same people (us!) who cry out to God day and night, will behold God Himself and his promise to give you the deliverance that Jesus won for you.

So today we can hold God to his promise. („You promised to come again and make things right!”)

This is what Jesus promised:

„And will not God to bring about justice for his chosen ones, will cry out to him day and night? Will you keep putting them off? I tell you, he will see that they get justice.” And we will be healed.

Now, at the end of these reflections: if there is someone who still fears meeting the Judge, remember this little story —

There were two criminals walking together to their date at court.

As they were walking, one of the two started humming a little tune. He started skipping as they walked. He started dancing.

The other criminal had had enough. He erupted: „Why are you humming? Why are you dancing? Don’t you know we’ll soon be standing before the judge?”

And his fellow felon replied:

„You know what I just found out?

My father’s the judge.”