It’s Christmas. So what? 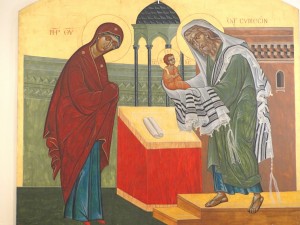 Christmas is a children’s holiday, though not only that. One remembers standing as a preschooler in front of the big nativity scene to the side of the altar in church. Mary and Joseph and the whole menagerie had stood for days gazing at an empty wooden box with straw in it, but now the baby Jesus had plopped in in a painted diaper.

But most of us are no longer children. I live in a priory, and there are no children there. And still we celebrate. We celebrate first by cleaning everything within an inch of its life: in the days leading up to the holiday, the hallways of our priory would be unsafe for tiny tots. Huge floor polishers – one so large you ride on top of it – come out to wax the checkerboard floors. Long ladders enable monkey-monks to climb up to forgotten windowsills under the vaults and dust the top of the hanging placard screaming Silentium! over the main corridor. It looks like the night before a battle.

Something is happening, but it’s hard to remember what.

“He was in the world,
and the world came to be through him,
but the world did not know him.
He came to what was his own,
but his own received him not.” (Jn 1)

We pray with fervor on Christmas night, because we feel that something is about to happen. That something has happened.

On Christmas eve at midnight, our huge Dominican basilica is as crowded as a Tokyo train. People bring little folding stools to sit on, since there are never any pews left. As the liturgy glides on in the cold night, the peaks of the arches in the nave become obscured by a cloud of warm breath. We don’t need to heat the church on Christmas — the faithful do it for us.

But why do we do all this? The decorations outside and intense musical confessions within the church are an expression of a human yearning. We yearn for, and we long for, God. God with a human face.

And then, suddenly, He is here.

Heaven is just the other side of a permeable membrane, and it’s ready to soak through and transfuse our clammy world.

And that, really, is what Incarnation means. The World made flesh. The transcendent becomes immanent: a Child is born.

We need to remember what happened last night.

On Christmas, God broke through a membrane and plopped out, warm and wet, on the cold ground south of Jerusalem. Scandalous, but there it is.

On Christmas it should be easy to believe that God is nigh.

Christians never cease proclaiming, over and over, the wonder of the Incarnation. It’s because we can’t get over how astonishing all of this is.

The fathers of the Second Vatican Council wrote in their declaration Gaudium et Spes (which, lets not forget, means “Joy and Hope”): “The Son of God assumed a human nature in order to accomplish our salvation in it. The Son of God …worked with human hands; he thought with a human mind.  He acted with a human will, and with a human heart he loved.  Born of the Virgin Mary, he has truly been made one of us, like to us in all things but sin.”

Those old priests were still amazed at what happened in Bethlehem.

And this was nothing new. The earliest Christians already sensed how upsetting Christmas is. 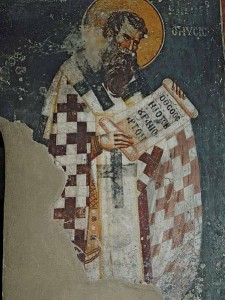 Gregory of Nyssa, one of the fathers of the fourth century, was awed by Christmas. He saw it as an expression of God’s mercy.

SICK, our nature demanded to be healed;

FALLEN, to be raised up;

We had lost the possession of the good; it was necessary for it to be given back to us.

Closed in darkness, it was necessary to bring us the light;

CAPTIVES, we awaited a Savior;

Are these things minor or insignificant?  Did they not move God to descend to human nature and visit it, since humanity was in so miserable and unhappy a state?

But what does that mean? It means we’re in a bad state around here. We’re in a corrupt world. We’re sinners. (And don’t we know it?) But all that sadness and all that suffering is what calls out to God to come to us.

Our fallen condition stimulates Jesus to come – it hastens His coming — and He comes in a way that is as close to us as our own flesh.

This reminds me of the prayer deacons must sing at the Easter Vigil: “O truly necessary sin of Adam, destroyed completely by the Death of Christ; O happy fault that earned for us so great, so glorious a Redeemer” (the Easter Proclamation).

And why? Because each and every one of us is infinitely precious to Him.

God’s purpose for us, even from the beginning of creation, and maybe even before creation, is that we be united completely with Him.

Jesus is born, and by our being united in Jesus, God becomes our Father and we become his sons and daughters.

We need to thank God the Father on Christmas — thank Him for sending his only begotten Son.

Now, why does John the Evangelist begin today’s gospel (Jn 1:1-18) with a description of the Word of God? It’s not a cute gospel. We had the story of Mary and Joseph and the ox and ass last night, but on Christmas morning it’s time to face the dawn: God’s Word.

The Word (דָּבָר) of God in the Hebrew Bible is an active, creative, powerful word — not a dry word on the page:

We hear, “Is not my word like fire… and like a hammer which breaks the rock in pieces?” That’s in the prophet Jeremiah (23:29). And — we Christians know — he is speaking of the Word Incarnate.

The writer of the Book of Wisdom addresses God as the one who “made all things by your Word” (Wis 9:1).

God’s Word is equated with His Wisdom, and “Wisdom” is God’s eternal, creative power. So “Word” and “Wisdom” are seen as one and the same. And – and here you know it’s a Christian speaking – Word and Wisdom are a Person. They have a Name.

We can’t forget that.

The ancient author says, “For while gentle silence enveloped all things, and night in its swift course was now half gone, your all-powerful WORD leaped from heaven, from the royal throne, into the midst of the land that was doomed; a stern warrior carrying the sharp sword of your authentic command” (Wis 18:14-16).

That was written in the Book of Wisdom — probably written in Egypt — long before the first Christmas.

We need to pray today, once again and for the first time, in the words of a Catholic priest who fled from Protestant persecution in England 260 years ago. Here is the English translation of the Latin words John Francis Wade wrote as he was hiding somewhere in France:

Yea, Lord, we greet Thee, born this happy morning;
Jesus, to Thee be glory given;
Word of the Father, now in flesh appearing.

O come let us adore Him,

O come let us adore Him,