Who is this Shepherd?

There are lots of pictures and cards and colored windows that show the Good Shepherd. Usually you have Jesus in flowing robes on a smooth green meadow, holding a curling staff. He has a little white lamb in his arms or on his shoulders. And sometimes he is smiling.

One of the most famous of these images, one I saw in my childhood and many of you probably saw too, is by a 19th-century German artist called Bernhard Plockhorst — I’m afraid Mr. Plockhorst is forgotten today, except for this one very sweet image, reproduced endlessly. 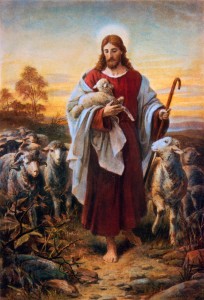 There is nothing realer than God. There is no one more powerful than our Lord Jesus Christ. In the midst of war and persecution, in the midst of our own darkness and our own sin, Jesus is there. So let’s consider another image of the Good Shepherd. Let’s go to Rome, the city drenched in the blood of martyrs, where Peter and Paul were killed by the original Evil Empire; where early Christians feared for their lives and prayed in silence and celebrated mass in secret, underground.

Today you can find, around the city of Rome and on its outskirts, little doors that lead to tunnels that take you down into the ground — into the catacombs, which are nothing more than dark, wet tunnels. And there you can see the graves and the altars of our Christian ancestors, our grandfathers and grandmothers who worshipped God in the dark. And there, in those tunnels, you will find the Good Shepherd. 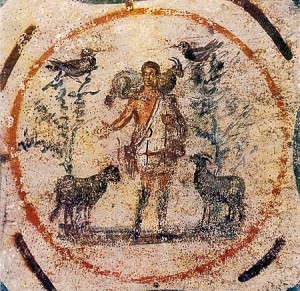 Our fathers in faith, who were facing oppression, painted and carved on the walls of these catacombs the image of Jesus the Good Shepherd. This was the way they thought of their Lord. This was the Jesus they turned to when the sword hung over them and soldiers were at the door. They painted Jesus as a young man in farmer’s clothes with a lamb over his shoulders. It’s simple. It’s a consoling image.

But the early Christians knew something that we forget. Shepherds had a dangerous life. They were hard men. Think of the Old Testament and of King David, who began life as a shepherd.

He was the shepherd who slew Goliath with a slingshot and then cut off his head. Lord Byron wrote a poem that begins:

The Assyrian came down like the wolf on the fold,

And his cohorts were gleaming in purple and gold;

And the sheen of their spears was like stars on the sea,

When the blue wave rolls nightly on deep Galilee.

David the shepherd — a boy — stood on the battlefield alone and faced all of that. 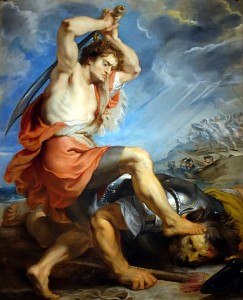 Listen now to the words of Jesus. “I am the Good Shepherd. And I will lay down my life for my sheep.” Now those words sound different.

Jesus is a shepherd who fights. His shepherd’s crook, the curved staff that shepherds use even today, is not there as a sort of theatrical prop. The wooden staff is related to the wood of the cross. That staff is a weapon. It’s used to fight off wolves.

(Think of that next time you see the bishop with his staff.)

Our Lord is a shepherd who puts himself between the prey and the predator. He pays a price to defend his flock from the enemy. And that is the image of the Shepherd that moved the Christians shivering in the cellars of Rome. That is the image that speaks to us today. In Psalm 22, the ancient author foretells the suffering of our Lord. We can actually hear the thoughts of the Good Shepherd as he faces the enemies of his flock:

it is melted in the midst of my bowels. …

For dogs have compassed me:

the assembly of the wicked have inclosed me:

they pierced my hands and my feet.   (KJV)

This is a prophetic psalm. Here is a Shepherd who will give everything for his flock. Here is Jesus, ready to fight for us. He defends the sheep with his own body and he ends up being torn apart — hands and feet pierced — for us.

And yet, a little further on in Saint John’s Gospel — this same Gospel — our Lord says, “no one takes my life from me but I lay it down on my own. I have power to lay it down and I have power to take it up again” (Jn 10:18). The Lord offers his life — he dies — but he does not stay dead. Good Friday does not have the last word. This is the Fourth Sunday of Easter, and Easter Sunday — the Resurrection — has the last word. And as we unite our sufferings to the sufferings of Christ, as we unite our death to his death, so shall we be united with him in his glorious resurrection.

Saint Paul said it today plainly: “For so the Lord has commanded us,
I have made you a light to the Gentiles, that you may be an instrument of salvation
to the ends of the earth.” Paul is quoting Isaiah (49).

We need to go out. We need to follow in the Shepherd’s footsteps.

The old hymn says, “Come, Christians, follow where the Master trod….” The Shepherd leads and we follow.

Consider the way a congregation looks during a traditional Catholic mass: the people all facing one direction, toward the high altar, toward the East, which is the rising sun, which is the morning of the Resurrection and the dawn of the Second Coming. And in the front, there is the priest, also facing the altar, facing the same direction as the people, acting in the person of Jesus Christ, himself going forward toward the Lord, following the Shepherd with the people right behind him. (We remember, on this Sunday especially, to pray particularly for priests and for holy vocations to the priesthood. With all their flaws, these are the shepherds our Shepherd sends to guide us.)

But in the end it is the Lord himself who guides us, on and on, step by step, into everlasting life. He is present here in the Eucharist, and as the persecuted Christians prayed in the dark to a God they could not see, so we pray to our Lord hidden under the appearance of bread. Yet we know that he is here.

And we are the sheep of his flock. More than that: through our baptism, we are sons and we are daughters of Almighty God. Each of us can approach God just as Jesus did, with the same awesome audacity, the same holy chutzpah. Each of us can say to him, as Jesus said, “My Father, I am yours and you are mine.” And each of us will say that during Mass, just as we do every Sunday.

We have a Shepherd. And our shepherd is also a Lamb. He is calling now, right there where you sit: as the Gospel says, “the shepherd calls his own sheep by name.”

Listen to his voice. Trust in him, follow him, and he will lift you up and carry you home on his shoulders.

“For the Lamb who is in the center of the throne will shepherd them and lead them to springs of life-giving water, and God will wipe away every tear from their eyes.”

After reading this post, my friend Dina Tsoar, who lives in the Negev Desert, wrote in to confirm that my description of the hard and hardy life of shepherds is quite correct. She recalled burrs in the sheep’s wool digging into her sweaty neck as she carried sheep around the ranch. Here is a picture of her with some of her bleating charges. 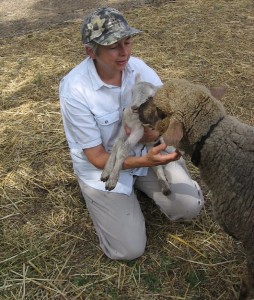