Today, as advertised, we are celebrating the glorious ascension of our Lord Jesus Christ into heaven. 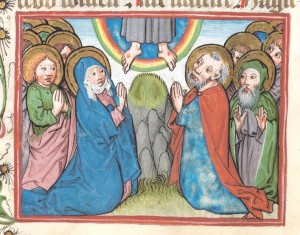 The Ascension of the Lord, Waldburg Gebetbuch (1486)

While in other places in the world Ascension is still celebrated on Thursday, here in Poland it has been moved to this Sunday, the Seventh Sunday of Easter.

That makes for some interesting coincidences.

This is the day on which Jesus rose up on his own power and ascended body and soul into the sky. That event happened, tradition tells us, on the crest of the Mount of Olives in Jerusalem. A big church stands on that hill today with a steeple pointing upwards to mark the spot on which the Lord departed from this earth. 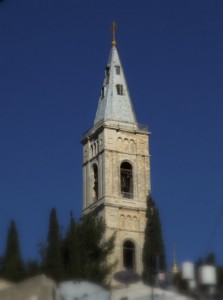 Russian Orthodox Church of the Ascension in Jerusalem (jerusalemshots.com)

He could have left in a less spectacular way; he could have disappeared in a cloud of smoke or taken a long sea voyage and never returned. But we think, probably, Jesus ascended into heaven — he chose this particular way — for two reasons: 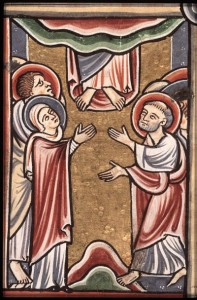 If Jesus had simply disappeared or gone off on a voyage there would have been others who pretended to be him or posed as him and that would have caused confusion.

There is only one Jesus, only one Son of God, and he had his mission on earth and when that mission was accomplished he went home to the Father: that is what the Ascension teaches. 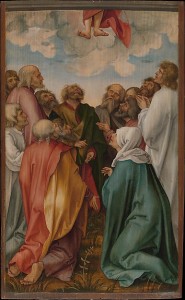 But also — also — Jesus is ascending into heaven in order to show us the way. He’s saying: I want you to come to heaven to live with the Father there. And here’s how you do it.

Now, surely he didn’t mean that we are all supposed to blast off toward the sky like rockets.

Remember: every single Sunday when we say the Creed together – when we say “I believe in one God” and the prayer that follows – we say, “I believe in the resurrection of the dead and the life of the world to come.”

There are no wasted words in the prayer of the Church. But what does that mean?

It means that after death your soul will go to the presence of God to be judged, individually. And you will either go to heaven immediately or spend some time in purgatory and then go to heaven or, God forbid, be separated from God permanently in the supremely painful experience of hell.

That’s alright for our souls. But the Bible says that at the end of days, when Jesus comes again in Glory, the dead shall rise from their tombs. In a mysterious way we cannot understand, we believe that at the end of time the bodies of the dead will be raised from the tomb. And they won’t be damaged in any way, they won’t be broken: they’ll be radiant and beautiful and healed from any hurt.

And that is what the resurrection of the dead means.

So in the great End of Days you and I shall rise up into heaven, not just in soul but in body too.  And we’ll do it in a glorious and purified body that recalls the glorified body of the resurrected Jesus.

That’s where we’re headed, folks: Up.

And the reason for that – the reason for that – is that your soul is not somehow more ­you than your body. As a human being and a creature of God we are both body and soul. That’s us in our wholeness. And God wants to save the whole us, all of us, body and soul. God wants to bring – and in his power he can bring – all of us, in all of our parts, to heaven.

Follow me, says the Lord. Follow me. And today the direction is not east or west, the direction Jesus wants us to go is up. Right after him. 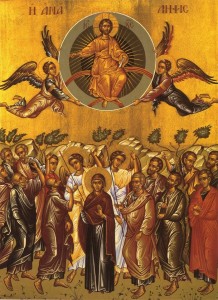 Oh but we know it’s not going to be easy. We know we’ve got a lot to do to prepare for that glorious day of resurrection (may it come soon!).

We’re scared, and Jesus knows it. And that’s why we turn to the Gospel today. The Gospel for the Seventh Sunday of Easter (John 17:20-26) isn’t about celebrating the victory at the end of time. It’s not telling us all about how glorious it’s going to be in heaven, although it is wonderful and important for everyone to think about and meditate on the joys of heaven and eternal life.

But not here. No, this isn’t even a part of the Gospel that comes from after the resurrection of Jesus. This is a Gospel from before Easter, so to speak, from before Christ’s passion and before Christ’s death and Resurrection. In this Gospel we are in a dark little room with Jesus and the apostles late at night on Holy Thursday — in the upper room on Mount Zion in the ancient city of Jerusalem.

What we hear is something really special.

Chapters 14-17 of the Gospel of John are known as the Farewell Discourse given by Jesus to eleven of his disciples immediately after the Last Supper. This is on the night before his crucifixion.

First, Jesus tells the disciples that he will be going away to the Father, that he will send the Holy Spirit to guide them. Jesus sends out his peace to the disciples. He gives the New Commandment: Love one another as I have loved you.

The next part of the discourse contains the Allegory of the Vine that shows Jesus as the source of life for the world and the disciples as the branches. But Jesus then warns of persecutions that are to come: „If the world hates you, remember that they hated me before you”.

In the final part of the discourse (John 17:1-26) Jesus prays for his followers and the coming Church. This is known as the Farewell Prayer or the High Priestly Prayer. How awesome is this High Priestly Prayer, this prayer of our Lord about us and for us! It’s a great poem of love. It is the longest prayer of Jesus in any of the gospels. It is sacred and it is powerful. And that is what we would have heard today if we were celebrating the Seventh Sunday of Easter. 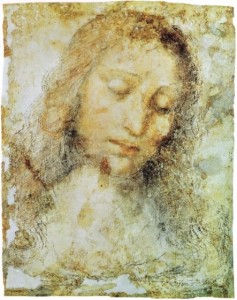 These words were prayed in a low voice in the dark in a rented room on a hill in Jerusalem, when Jesus and his closest disciples were gathered in a time of fear.

And they have been preserved and come down to us.

Holy Father, I pray not only for them,
but also for those who will believe in me through their word,
so that they may all be one,
as you, Father, are in me and I in you,
that they also may be in us,
that the world may believe that you sent me.

Righteous Father, the world also does not know you, but I know you, and they know that you sent me. I made known to them your name and I will make it known, that the love with which you loved me may be in them and I in them.

He’s taking about us. He’s talking about his followers on earth; the assembly of the people of God. That means the Church. That means us.

And after this discourse, after this great prayer, we know that Jesus and the disciples went out of that safe upper room. They left the place of the Last Supper in the middle of the night and came down from the hill of mount Zion in Jerusalem. Jesus and a few disciples went across a valley, the Kidron Valley, which runs alongside God’s holy temple on the eastern edge of the city. 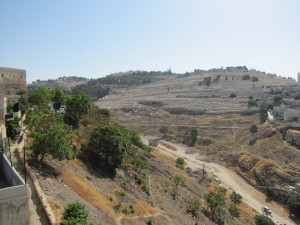 And they went a little ways up the side of the next hill. That hill is the Mount of Olives. 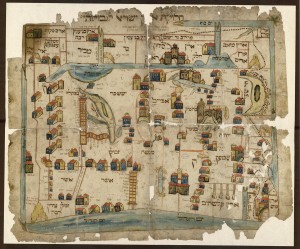 But on that Mount of Olives, a little further down the slope and closer to the temple in Jerusalem, is an olive grove. A garden filled with ancient olive trees. And you can go there today. It’s the Garden of Gethsemane. 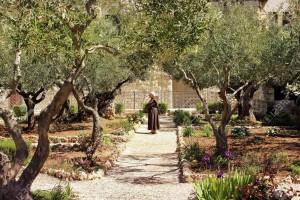 The Garden of Gethsemane. Where Jesus spent the night before his passion.

So on that same hill where Jesus has his glorious ascension, our Lord also had the most painful and most frightening night of his life. He spent the whole night in prayer. He was so fearful that he sweat blood. He prayed, “Father, let this cup pass from me.”

He knew that his final battle with Satan was coming and he knew how painful and humiliating it would be. He knew he would have to empty himself totally, body and soul, to accomplish the saving work of atoning for our sins.

But he also said, „Not my will but yours be done.” And that was a decision.

This decision, the decision of Jesus to go ahead and follow the way of the Cross, was made on that night in that garden. And sure enough an angry crowd led by Judas arrived with burning torches in their hands and grabbed him out of that garden and started him on the road to the crucifixion. It all started right on that hill.

And today we’re back on that hill. And how different things look.

We see the Lord is rising into heaven; the King is rising to take his throne. And we stand there with the disciples in total amazement. 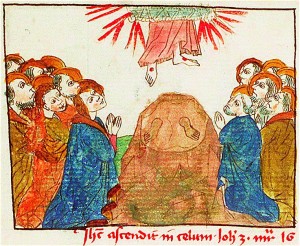 The Ascension, detail from the “Speculum Humanae Salvationis” (15 c.), Koninklijke Bibliotheek, The Hague

That is the prayer of our High Priest. That is Jesus’s farewell discourse, his last instruction to you and me. This is your destiny, this is your place: Heaven.

Jesus wants you to come with him there.

We listen to the voice of our Master and we follow him: Up!